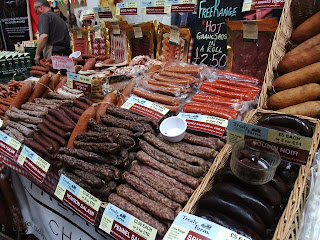 I used to be a bit sniffy about British charcuterie. It didn't seem quite right - surely only the French and Italians had the centuries-old know-how to do it properly? And for a while all the samples of rather bland British salami and sausage I tasted bore this out.

Last Sunday at the Love Food Spring Festival was a case in point. There was a stall from Monmouthshire-based Trealy Farm including a very tasty venison salami, a brilliant soft chilli-spiked black pudding (for eating cold rather than cooking) and one of the best garlic sausages I've ever tasted - apparently much admired by Raymond Blanc in his recent series. They also won the title of Best UK Food Producer in last year's Observer Food Awards. 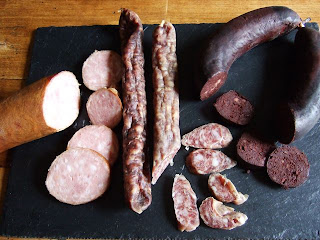 Given the charcuterie craze in restaurants and wine bars at the moment they should do well.
Posted by Fiona Beckett at 7:55 AM