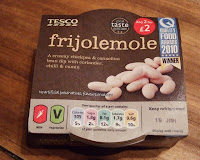 My husband, who likes a good bargain, came back with a tub of Tesco's Frijolemole yesterday which is on a 2 for £2 deal. And I have to admit it's brilliant for a ready-made spread.

In the words of the package it's a 'creamy chickpea and cannellini bean dip with coriander, chilli and cumin' and has a really good chilli and coriander kick. Of course once you look on the back there's a lengthy list of ingredients but none is particularly noxious (it's based on mayo and sour cream). And it hit the spot perfectly smothered on crostini with an early evening glass of South African Sauvignon Blanc.

I thought the name Frijolemole was conjured up by Tesco's marketing department, but apparently not. Even Delia has a version but when you tot up the ingredients it would probably cost at least as much to make. Possibly worth it for a party, though if you get the frijolemole habit. Or when the price goes up as it inevitably will.

The product was a winner in the 2010 Quality Food Awards btw so it's not just me.
Posted by Fiona Beckett at 8:54 AM

Email ThisBlogThis!Share to TwitterShare to FacebookShare to Pinterest
Labels: spreads